The Four-Stage OCM Course redesign has been completed.

The map below highlights the new layout of what were previously the first, second and seventeenth holes. 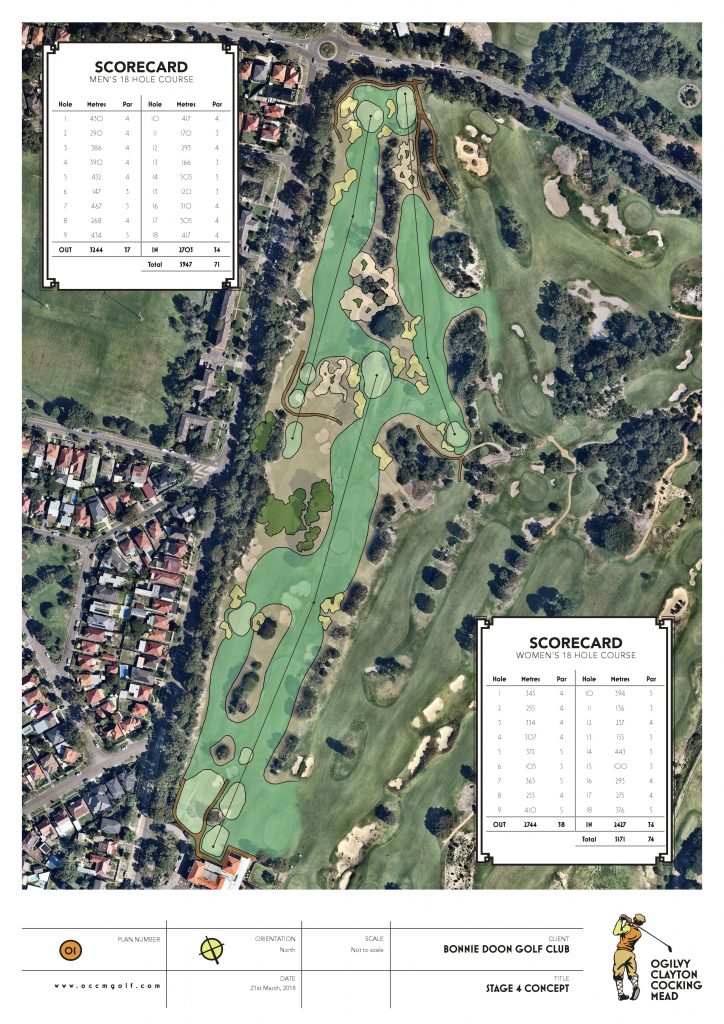 The Style of the Golf Course

Our design at Bonnie Doon looks to mimic the work of nature, with a mixture of irregular undulations, wispy roughs and rugged bunker lips that appear to have been formed from years of wind and rain. There is an abundance of undulating sandy ground and some marvellous vegetation and both encourage the feeling of playing a very natural golf course.

It is difficult to label many golf courses.  Some are obviously links or ‘parkland’. Melbourne has its own unique sandbelt courses with that distinctive bunker style. The fine golf in London and Paris is best described as ‘heathland’ golf. Some of the best of northeastern America is distinct ‘parkland’ and they are much different looking courses from what we have in Australia.

We are constantly borrowing ideas and elements from courses all around the world. The principles of great design don’t vary despite courses looking quite different. Alister MacKenzie incorporated the principles of The Old Course in St Andrews into Royal Melbourne, Cypress Point and Augusta. They all look to be much different courses but the choices confronting the player and the shots required to play successfully are present in all.

Those same principles are evident at Bonnie Doon.

The ridge between the practice fairway and the right edge of the 14th fairway draws inspiration from the intimidating tee shot at Hoylake’s (Royal Liverpool) opening hole. The undulating and largely blind 13th green uses the principle of Kingston Heath’s 17th green. The second shot at that hole is completely blind but the green is large, unbunkered but difficult to putt. The ‘horseshoe’ green at the 14th replicated the principle of George Thomas’ 1st green at Riviera and MacKenzie’s original 9th green at Augusta.

The result is something quite different from anything else in Sydney. Perhaps it is closer to the Melbourne sandbelt with the appreciably wider fairways, firm and fast playing surfaces and the mixture of wispy fescue, heathland vegetation and a scattering of sand that make for ‘scruffy’ roughs. However, the bunker style is distinctly different from the Melbourne hazards and the greens are more varied and more undulating than most of the sandbelt where so many are simply titled from back to front.

“The strategy of the golf course is the soul of the game.  The spirit of golf is to dare a hazard, and by negotiating it reap a reward while he who fears or declines the issue of the carry has a longer or harder shot for his second;  yet  the  player who avoids the unwise effort gains advantage over one who tries for more than in him lies, or who fails under the test”

Few since have articulated what the concept of strategic golf is, as well as George Thomas, and it encapsulates the philosophy of the new holes at Bonnie Doon. There has to be more to golf than simply hitting the ball. There has to be an intelligent purpose to placing the ball in the ideal place from which to play the next stroke.

Unashamedly our design philosophies borrow heavily from the concepts made famous during the Golden Age of Golf Design (1913 and The National Golf Links of America through to the early years, and the financial ravages, of the Great Depression) when most of the world’s best courses were built by architects including Thomas, MacKenzie, A.W Tillinghast, Harry Colt, Chandler Egan, Seth Raynor and C.B Macdonald.

The key to interesting golf, whether it is for the average player or the best professionals in the game, is creating space to play. Allied to this are greens that favour an approach from a specific part of the fairway. It is difficult, to create playable strategic golf courses without width. The alternative is narrow fairways and players hitting to places determined by the architect.

MacKenzie’s courses at Royal Melbourne, Augusta and Cypress Point offer space from the tee and it is up to the player to decide where best to drive. That is the abiding principle of The Old Course – the most marvelous course in the game. Nothing there is dictated to the player – you work out for yourself where best to play.

Hazards – most often bunkers – guard the ideal line to the green and reward those who can play closest to, or over, the trouble. Every metre the golfer strays from the ideal line, the more difficult the approach. It is not, however ‘risk and reward’ golf. That has connotations of black and white – you either make it or you don’t. Rather it is golf using ‘multiple shades of grey’  and well done it makes the game interesting to play.

Rarely on any of the world’s best courses, is the middle of the fairway the ideal line to the hole. On many holes at Bonnie Doon, there is more to the tee shot than simply hitting as far, and as straight, as you can. Arguably players are afforded an easier shot from the top of the hill on the new 10th hole.  The shot is longer but they see more of the green from up there and the lie is more likely to be flatter. The shot into the 18th is easier from the left than the right. The new 8th hole will be best approached from high on the right side of the split fairway. The closer the player is prepared to play to the boundary ridge at the 14th hole the easier and shorter the next shot.

The wildly undulating fairways give the course much of its character and there are many instances where the penalties for a miss-placed drive are not particularly obvious. Driving out of position can sometimes mean the approach is blind. The shot from the right side of the new 18th is one example of that principle.

A well-shaped left to right drive at the new 16th hole will be advantaged with a friendly bounce toward the green, as is the tee shot from the 14th with a kick-off of the mound in the centre of the fairway.

Another feature borrowed from the sandbelt is sections of the common fairway. If fairways run close to one another, our preference is to join them together rather than separating them with a narrow strip of rough. On occasion, this will afford the player extra room to play away from hazards but that may leave a poorer line to the hole. In other instances,  common fairways help create a feeling of openness on what is otherwise a quite small golf course. Kingston Heath is an excellent example of this principle. It is built on only 120 acres yet it manages to feel like a big and expansive course.

Much of the strategy of the golf course is dependent on the greens and their orientation, size and contour. Those factors determine the best place from which to approach the hole and the great strategic courses defend the ideal place from which to play with hazards that must be challenged.

Green complexes should be varied and interesting. They can be a variety of sizes and contour – from the wildly undulating to close to flat.

Some golfers can view contour as an aggravation and indeed some may claim that a particular green is “unfair” if a perceived good shot is not rewarded with a flat putt. We view contour slightly differently and see it as a chance to add interest, to help create or accentuate the strategy, or simply as a chance for the more skilled or observant golfer to differentiate himself (or herself) from those with skills less developed.

Like anything used too often, the overuse of wild undulation only serves to aggravate and there is no wish to build too many heavily contoured greens at Bonnie Doon.  By the end of the project, there will be a good mix of sizes and contours.  Bonnie Doon is a short, ’sporty’  course and so much of its defence against the power of the modern low marker will be in the greens. And there will be a number of short par fours where good players instinctively know they should make birdies, but they will extract more than their fair share of  bogeys  from  those  who take an unwise chance or hit a poor shot.

Depending on the pin position a missed approach on the ‘short side’ may result in a very difficult recovery, but we try to ensure there is enough contour to help the average player  find the putting surface, even if they can’t get close to the pin.

There may occasionally be times when the best route to the hole is to bank an approach or a putt off a slope  in order to get close to the pin.

Bunkers are an important part of the course at Bonnie  Doon. They are irregularly formed with slightly rugged edges to give the impression they have evolved through years of wind and rain.

The concept of bunkers being a hazard and imposing some form of penalty has been lost in recent times. Clubs go to extraordinary lengths to create ‘consistent’ surfaces out of sand, an essentially inconsistent medium that is all but impossible to make perfectly ‘consistent’. Slight variations are bound to occur from bunker to bunker and that is an important part of golf.

They enhance the natural feel and look of the course as well as helping to distinguish the more skilled, inventive or more observant golfer. Providing there is enough sand to play a shot (usually much less than most would believe) the changes in colour, texture and depth should be seen as part of the demands of the hazards.

A unique feature of the Melbourne sandbelt is greenside bunkers cut very close to the putting surfaces. Some courses in Sydney do not follow this principle but it  is an important part of  the design at Bonnie Doon and helps create some exciting pin positions that further emphasize the strategy of the hole.

Our favorite tees are those that blend with the surrounds and barely look like tees at all. Whilst  they need  to  be  functional areas with enough flat spaces to play  from  (and to  avoid wearing), a little contour surrounding the tees helps give them a natural appearance. At Bonnie Doon there have been many occasions where it has been possible to link tees to the previous green using short grass. This approach is common on the sandbelt and aside from promoting  a feeling  of  ‘flow’  to the golf  course; it provides a simpler and  more  aesthetically  pleasing  alternative to rough or paths.

Quality roughs are an important part of the long-term vision and character of the golf course at Bonnie Doon. Our focus is on maintaining beautiful brown and rust colours to provide contrast to our brilliant green fairways.

With no significant, naturally occurring water hazards or wetland to match those at The Lakes or Eastlake, the idea  of  including one into the design of the new course was never considered.

Man-made water hazards often appear somewhat artificial and they require significant expense to construct and maintain. There are some low areas on the course where water may once have been found but we wonder how a man-made water hazard would add to any hole or the play of the course. With so much sand, terrific natural undulation and vegetation, our preference is to utilize these features in the creation of enduringly interesting golf.