One of Australia’s Most Influential Golf Clubs

One of Australia’s most influential golf clubs began with an assembly of ‘golf mad cranks’ at the home of Marrickville Doctor Charles Adam Patrick in 1897. Now, more than a century later, it is a club with a host of traditions, the third-oldest in Sydney, and rare in that it has existed at three different sites.

Under its original name of Marrickville Golf Club, it was a 12-hole course amid what were then the estates and grand homes that dotted the hills of Tempe. One of these was the notorious ‘cliff hole’, which required a lofted iron shot to carry up the rocky face of a 15-metre cliff.

From the outset, membership at Tempe was strongly encouraged to anyone with an interest in the game. Many of the male members were bookmakers, jockeys and hoteliers. Members were empowered to invite ladies to play on the course as early as February 1898 and a drive to recruit lady members was evident in the first year with construction of a tea room used as incentive.

The first Monthly Medal for ladies was played in 1899 and mixed foursomes became a regular calendar event. Associate members of Bonnie were instrumental in the creation of the Ladies Golf Union.

The club moved to a new site at Arncliffe in 1907, also prompting a change in name. Bonnie Doon was the title of the grazing property the club purchased – land included in Cook’s original charter of Botany Bay – and that was the name chosen by a majority of members.

Now the club boasted an 18-hole course and a cattle station homestead for its clubhouse.

Members again picked up their clubs, this time moving to the present site at Pagewood. Taking over the much younger New Metropolitan Golf Club 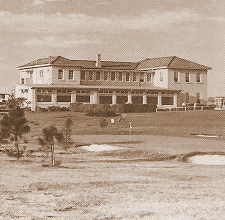 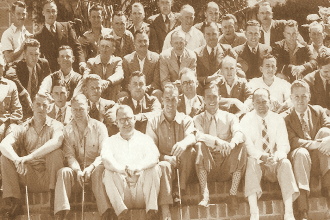 in 1947, Bonnie Doon’s 850 members now played on a pure links-style course of wide fairways and natural hazards, carved out of sandy heath and banksia scrub.

In the years since, the nature of the course has changed, the membership has grown and facilities have developed to bring the club up to Group One standard. But the character of ‘The Doon’ has remained – ‘first and foremost, a golfers’ club’.

Click Here for a Full Version of the Bonnie Doon Timeline

Recent work on the new trophy cabinet has led to the discovery of some historic trophies.
Tom Howard was club champion in 1913 then again continuously from 1915 to 1921. This run of form set a record at the time for eight club championships (seven consecutive). Barrie Baker was later to break this record with 10 wins, followed by Greg Bell, who won his 11th club championship in 2016.
In 1920, the Australian Open was played at The Australian Golf Club which played host to 27 players for the tournament. Tom won the Amateur trophy with a total 311 in fifth place behind the winner Joe Kirkwood (290) and the likes of Dan Soutar (295) and Fred Popplewell (302).
He kindly presented his trophy to his home club, Bonnie Doon. The next year (1921) Tom defeated Ivo Whitton, Eric Apperly and Eric Pope to win the New South Wales Amateur at Royal Sydney.  In January 1922, he left the amateur ranks and turned professional to take his first post as club professional at Concord Golf Club. In August 1923, Tom finally succeeded at Royal Adelaide, winning the Australian Open by three shots against a field including Ivo Whitton, Fred Popplewell and Eric Apperly. Tom’s record at The Australian Open is very impressive.

Thanks Tom, for leaving us with this trophy and another proud link to golfing history in Australia.